If I try to picture what a replica of a 16th century Mediterranean village situated on a coastal bluff in the Dominican Republic would feel like, I couldn’t have visualized Altos de Chavon in Casa de Campo.  This ultra-exclusive resort and residential community is a Caribbean destination that is part 16th century, part 21st century and passionately devoted to the arts.

The levels of luxury accommodations here aim not to be outdone.  After all, some of the richest business tycoons own palatial homes here, and both a famous Bill [Gates] and an infamous Bill [Clinton], along with a host of Hollywood highbrows, have deplaned in the private airport here.  Name-dropping isn’t part of the accepted local culture, if you want to feel welcomed.  I learned this from Angel, the resort agent I befriended and who personally arranged my VIP access.  My tour of this 7,000-acre sprawl in La Romana, which is 130 miles southeast of Santo Domingo, starts in the 16th century. 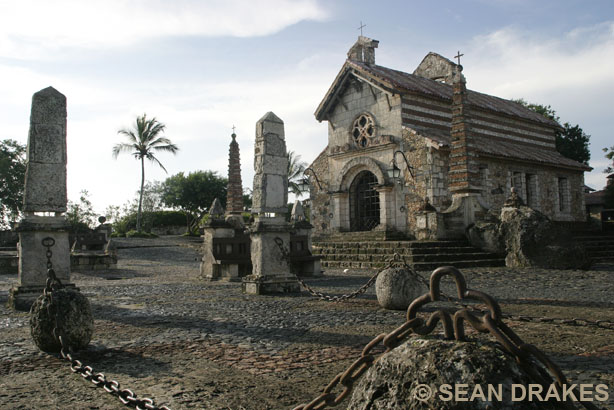 Altos de Chavon is a replica of a traditional Mediterranean village, it was built on the highest point overlooking the Chavon River.  Construction of the coral block and terracotta buildings that frame narrow cobblestone walkways, began in 1976 under the stewardship of Italian artist Roberto Copa.  The final stone was laid in 1982.  Walking the site at midday feels like a Hollywood set for a movie involving a romantic tryst in Europe.  You can dine at bistros or three specialty restaurants: El Sombrero, La Piazzetta and Café del Sol.

The site houses a 5,000-seat Grecian-style amphitheatre that has hosted Dizzy Gillespie, Gloria Estefan, Julio Iglesias, Alicia Keys’ music video shoot and the Dance Theatre of Harlem.  There is a Regional Museum of Archeology that is home to a collection of pre-Columbian ritual artifacts.  And an art gallery and craft ateliers that make ceramic and silk-screened souvenirs, and The Altos de Chavon School of Design caps the effort to market Casa de Campo as an arts-friendly destination.  You should note: The School of Design offers degrees in design fields and the fine arts, and is affiliated with Parsons School of Design in New York and Paris. 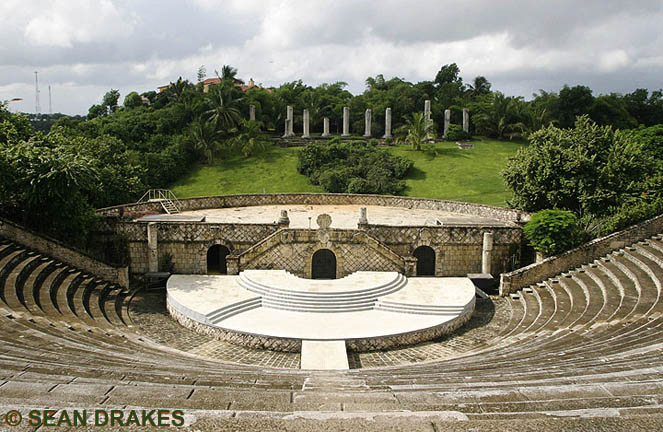 The Dominican Republic, is the Spanish-speaking territory of the island of Hispaniola, a border with a treacherous history separates it from Haiti.  Puerto Rico is just 60 minutes east by plane.  In order to deliver me to the resort’s doorstep, my driver surrendered his license at a security stall that has the span and scale of an interstate toll booth.  That was the first cue to the grandeur that is a staple at Casa de Campo.

I am in a chic suite, but Casa de Campo resort offers the option to supersize your accommodation with a rental villa tastefully lathered with luxury.  Exclusive and Oceanfront Villas host up to 12 guests at roughly $840–$2,445 per night ($577–$1,345 off-season), that includes maid and butler service, breakfast prepared in your villa, a pool or whirlpool, and concierge service for sporting and dining reservations, and private airport transfers.

I won’t name-drop, but I have the good fortune and pleasure of photographing two gorgeous private residences during this visit.  Both homes reside on an 18-hole golf course.  There are three here, each designed by Pete Dye:  Teeth of the Dog has seven holes skirting the ocean and is ranked #17 on Golf Digest’s list of top 100 courses in the world.  Links is a hilly inland course with five holes that tangle with lagoons and lakes.  The Dye Fore course is positioned 300-feet atop the bluffs of the Chavon River, it is a mesmerizing masterpiece.  Its 7,800-yard par 72 layout attracts and challenges pro golfers who shell-out $90 – $215 per person per round.

I grabbed lunch at Chinois at the marina fashioned after Italian portofinos.  I am passing on shopping at designer boutiques, shooting sporting clays and playing tennis (there are 13 courts).  My visit is out of season for the polo matches hosted

November – May at the equestrian facility, which has five fields and 70 trained ponies.  Instead, I’m bound for a day trip sail to Catalina Island.

After sailing, a dinner party at the home of Cuban artist Bibi Leon is a great wrap to the day.  Walking through her elegant front door, my feast begins.  My eyes are restless, in every room, there’s original creative expression by Spanish artists to admire.  Tomorrow, I will ride Bibi’s coattail as we soak in the decadent interior design of her friends’ vacation homes, a collective that can fill two coffee table books.  This is la dolce vita, where the air always feels rare.